During rainy seasons, a lot of students are very eager to know about the suspension of classes to avoid waking up early in the morning and to lessen the effort of going to school for nothing. In these advanced times, instead of waiting for the announcement on the television, we just wait for the posts on Facebook which makes the information spread easily and effectively.

However, one mayor won the hearts of his followers by answering witty questions on his Facebook account.

It seems like Mayor Kit announced the suspension early and one netizen said thank you for his early announcement.

Seems like he’s one of the most interactive Mayors in the Philippines; one netizen wishes that all mayors could be as responsive as he is.

On the contrary, Mayor Kit said that he’s not responsive, he just announced the suspension so he could sleep early. LOL!

One netizen even doubted if the suspension was true or not.

Even working people tried their luck and asked if they are also included with the suspension, just like this call center employee.

Mayor Kit didn’t just capture the hearts of the Cainta people but also other people outside Cainta. In fact, Reiko’s post already gathered 6,400 reactions and over 8,300 shares. 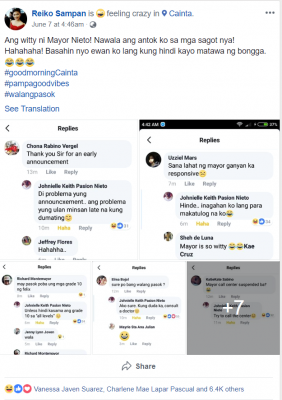 Waiting for the announcement of class suspensions can be quite a thrill. We hope all mayors can be as witty as Mayor Kit, kudos!