There are times when people are too busy to stop and help others in need. We cannot blame them: some have jobs to do and other people to take care of. There are also some who are afraid to fall victim on modus operandi that crooks are using.

However, a kind fast food crew, despite how heavy his workload is, did not let it stop him from helping an old man. Instead of just walking away and continue with his duty in the store, he did not ignore the man and lent a helping hand.

While the fast-food chain is busy with customers, a man entered, looking a bit disoriented. According to the netizen who posted the story named Eugene, even before the man sat down, the male fast food crew approached him. He greeted the man as if they know each other for a long time. He also helped him carry his bag and look for a seat.

Not only that, the service crew also counted the money that the man has. He also assisted him in whipping the saliva on his face.

During this time, other customers also started noticing the old man. Their interests were piqued when the male crew arrived with the food and even feed him. Even if the young man was in the middle of his shift, he did not think twice about helping this customer. The kind fast-food worker also made sure that the man was able to eat properly.

Touched by his action, the Facebook user asked the guard if the two know each other. According to the security, the old man always eats in the store in the morning and at night and the selfless service crew is always there to help him, as if he’s serving his father.

No wonder why many people are commending this young man! 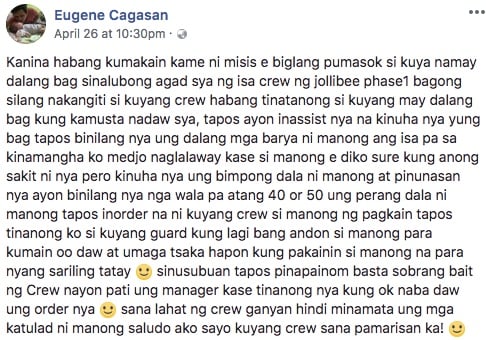 Hats off to this crew! It’s not every day that we encounter people like him but it’s great to know that there are people who are willing to go beyond their job to help satisfy the needs of their customer.