Can you still remember when your parents would always tell you not to talk to strangers? It’s a general rule for a reason. Although not all, some strangers have nothing but dark motives with other people. From budul budol gangs to kidnapping syndicates, there are different ways on how these criminals can extort money from unsuspecting victims.

Recently, a concerned netizen named Ley Celoso decided to share his own experience on Facebook to warn people of a certain person who consistently victimizes people. According to Ley, he confirmed that the modus is not new and there were several victims of the same tactic.

While walking along Ligaya, Marikina to go to his dentist in Sta. Lucy Mall at 11:30 in the morning, a person in his 40’s stopped him and asked if Ley knows someone whom he could pay to attack another person. According to the suspect, his “niece” was sexually harassed by another person. He politely said “no” so the person asked Ley to come with him to the barangay hall to help identify the person in the 2×2 ID photo they collected.

While walking to the barangay hall, they met another person who went with them to the place as well. His suspicions started when the first person started asking him about his wallet’s content, ATM, PIN, and money.

The suspect also told him that if he’s innocent, he will provide his pin code. The other person with them immediately provided his pin code, much to his surprise. Fearing for his life, he gave a fake code to the suspect.

After asking for their age, the suspect asked the other person, who is older, to go to the barangay hall first to check the picture of the alleged attacker. Before going, he left his bag to Ley. After five minutes, the person returned and reported that suspect’s niece and her boyfriend are both in the barangay hall.

When it’s his turn, the two suspects are urging him to leave his bag as well. Knowing that they will just take his belongings, he immediately left the scene and said that he needs to go to his dentist appointment. Luckily, a jeepney passed by.

Fortunately, the netizen was able to escape from the hands of the suspects. He later found out that the first person who approached him is Virginio Rolando Aquino aka Rolvin from Caloocan City who already went to jail because of his modus. 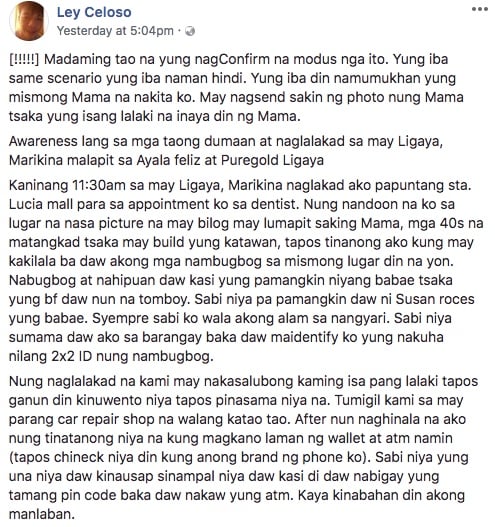 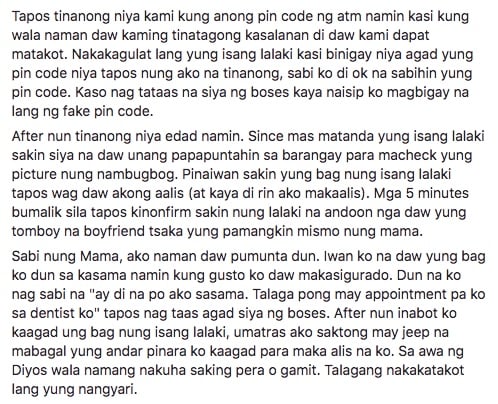 Let this serve as a warning to everyone. We should always be vigilant and more alert, especially when dealing with other people.